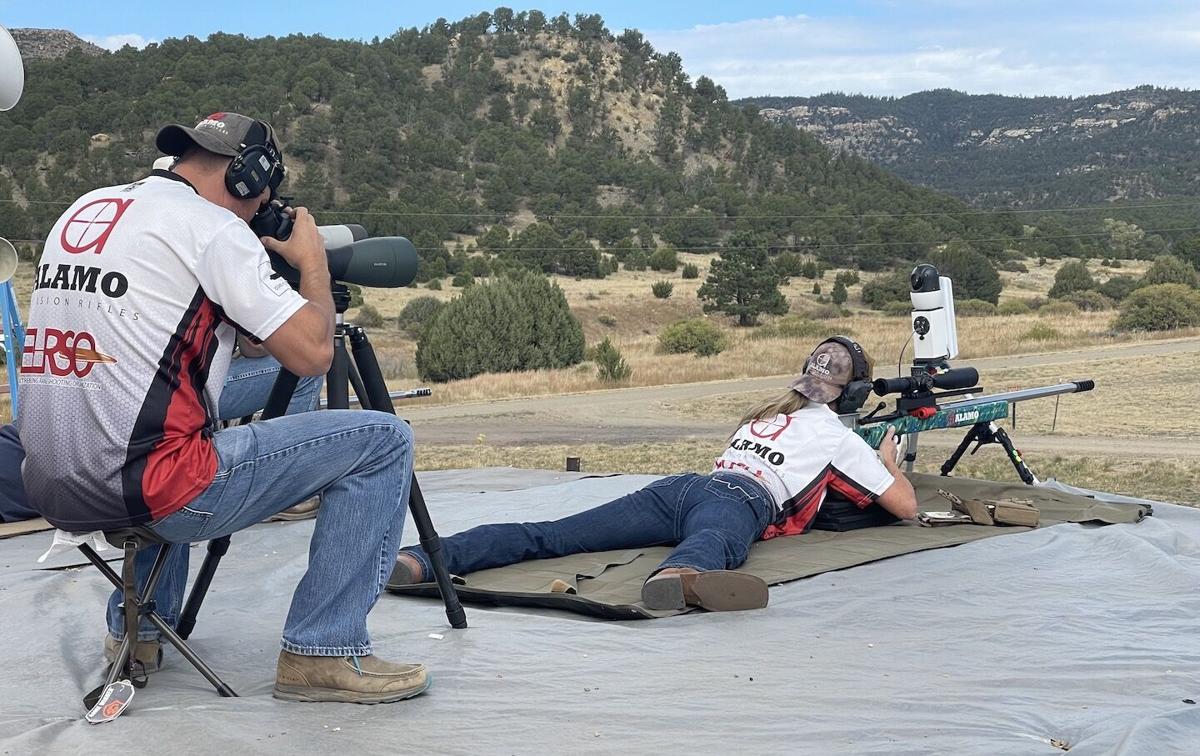 Lindsey Paul prepares for a shot at the King of 2 Miles event as spotter Robert Waggoner checks down range conditions. The Leonard resident became the first woman to win the event and the first to hit the two mile target more than once. 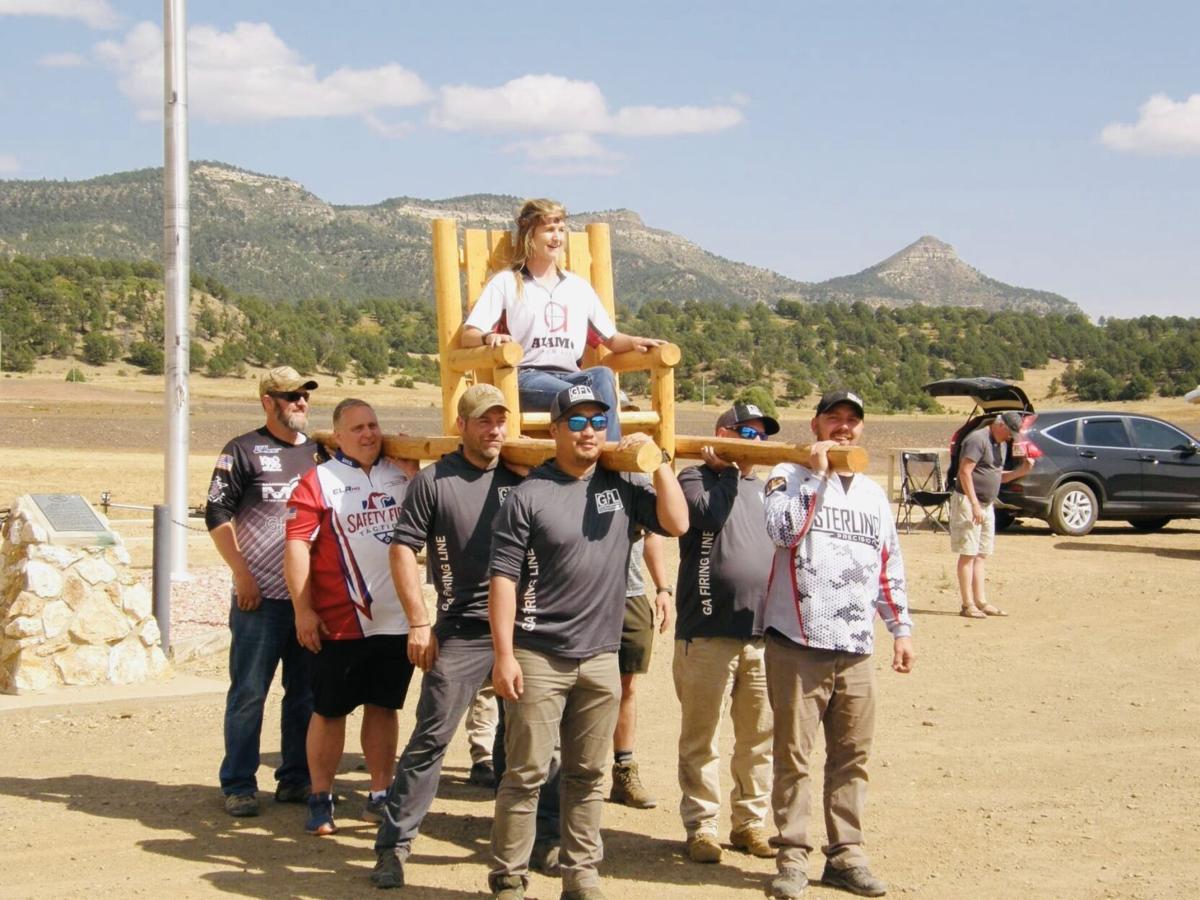 Lindsey Paul was the Queen of the King of 2 Miles. The Leonard resident became the first woman to win the event and the first to hit the two mile target more than once. 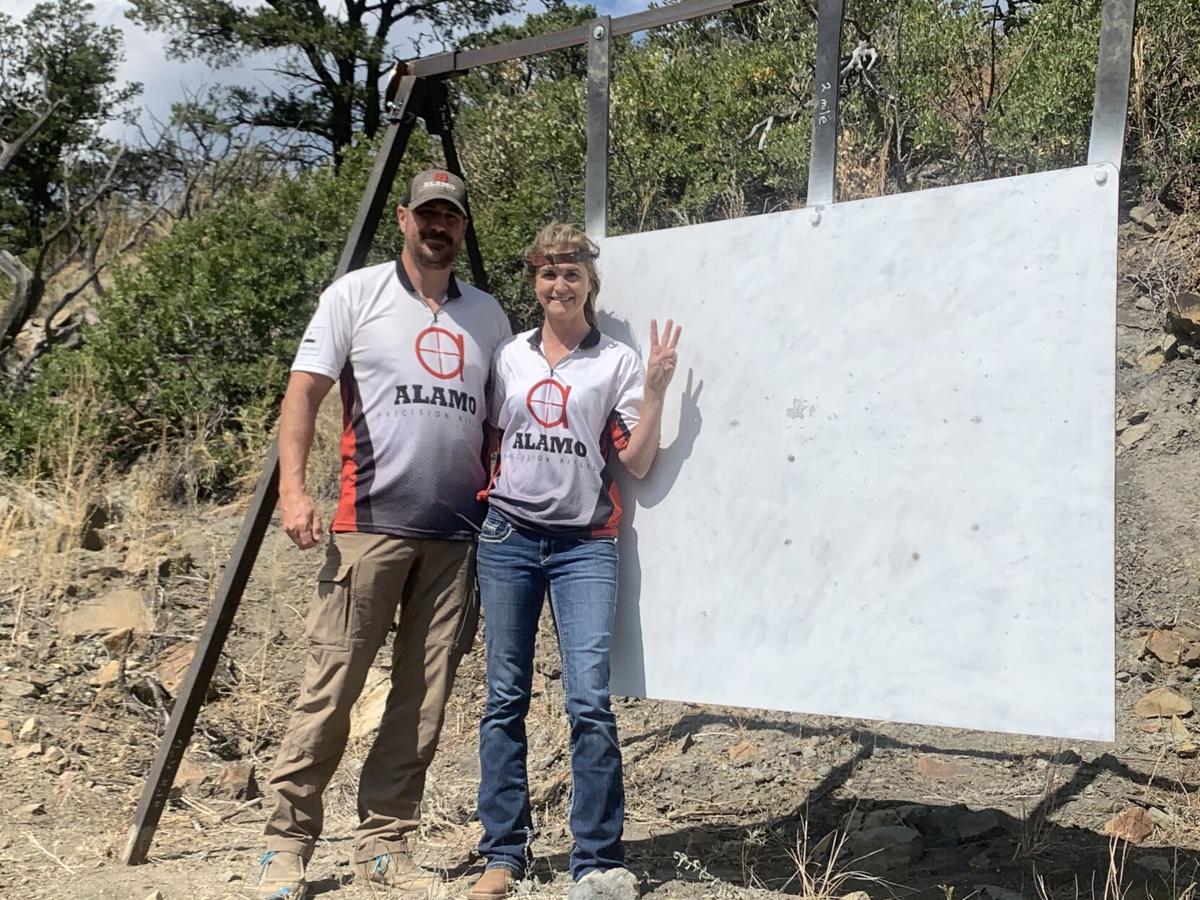 Lindsey Paul, shown with her boyfriend Robert Waggoner, is shown by the target in the King of 2 Miles event. Paul, a Leonard resident, became the first woman to win the event and the first to hit the two mile target more than once.

Lindsey Paul prepares for a shot at the King of 2 Miles event as spotter Robert Waggoner checks down range conditions. The Leonard resident became the first woman to win the event and the first to hit the two mile target more than once.

Lindsey Paul was the Queen of the King of 2 Miles. The Leonard resident became the first woman to win the event and the first to hit the two mile target more than once.

Lindsey Paul, shown with her boyfriend Robert Waggoner, is shown by the target in the King of 2 Miles event. Paul, a Leonard resident, became the first woman to win the event and the first to hit the two mile target more than once.

The honor is called the King of 2 Miles and it is reserved once a year for the shooter who is most accurate at hitting a pickup truck bed-sized target from that range.

This year the king is a queen, Lindsey Paul, and she hails from Texas. The Fannin County resident won the King of 2 Miles at the NRA’s Whittington Center near Raton, New Mexico, in late September becoming the first female to win along with being the first shooter to hit the target more than once. Paul hit the 48-inch by 60-inch target at 3,520 yards three consecutive times to give her a come-from-behind win.

It ended a summer run that began in August with Paul setting a world record in cold bore shooting when she had three impacts at 2,464 yards in August.

The 39-year-old McKinney police officer is a relative newcomer to competition shooting and long-distance shooting, having only started about four years ago.

“My first passion is hunting. I just kind of thought about it, mainly to make me a better hunter,” explained Paul, who moved to Texas from Washington in 2004.

When she started competition shooting she initially dabbled in shoots around Texas with ranges from 500 to 1,000 yards. It was not until 2019 that she jumped up to a thousand-plus yards or extreme long range events, and even then it was a sputtering start because so many events were shutdown in 2020. She competed just once during the Covid shutdown.

“That is the challenge,” Paul said of finding places to practice and compete. “I have 100 acres, and when it is dry enough I can get across the creek and have a 500 yard range. Even that doesn’t help. You need 1,000 yards or more.”

Shooting alongside her boyfriend and spotter, Robert Waggoner, co-owner of Alamo Precision Rifles in Hurst, Paul has been able to shoot some in Texas at Hawks Double Mountain Ranch near Roby, and took in a practice round on way to the 2 Miles at Greystone Castle Sporting Club near Mingus.

The 2 Miles began in 2015 and participation is by invitation. Paul was first invited in 2020, but the event was canceled. Normally an international event, this year’s field was limited to 77 shooters from United States because of travel restrictions.

In a male-oriented sport, this year’s event included seven women with three finishing in the top 15.

“There have been some females that have competed before. This year three of us made it to the final round,” Paul said. Along with Paul, Rei Hoang of Arizona finished fifth and Jaclyn Bryan of Kansas was 15th.

Paul said she believes women are adept at this type event, “I think because we listen and we don’t let ego get in the way. If someone says we should try something, we try it.”

While it may be a sport anyone can participate in, cost can be a barrier. Paul shoots a custom built .375 CheyTac caliber rifle from Alamo Precision, topped with a 7X35 NightForce ATACR scope, Wedge Prism and anchored by a McMillan custom stock. The cost is about $10,000.

An additional cost is the custom-loaded 400-grain solid copper bullets for the wildcat caliber. Even with her loading ammo it runs about $5 a shot.

Paul’s rifle weighs 33 pounds. She only weighs 115. Shooters are allowed to use only a bipod rest and a sandbag or monopod may be attached at the butt. Paul’s rifle has no special recoil system.

Still learning about the intricacies of the sport, Paul only recently learned about barrel life. The .375 CheyTac load burns at an extremely high temperature at the neck, which can cause the barrel to need replacing every 400 to 600 rounds.

“I am so new to this I didn’t know enough when the gun was built to keep a round count on this barrel. When I loaded bullets for the match it was shooting slow and I thought it was dying. Then I did a practice round and it was shooting normal. I did not know what was going on. I did not have a lot of confidence. I just felt the barrel was not going to last,” Paul noted.

The 2 Miles is a progressive distance event with eight distances starting at 1,572 yards. Shooters at the first target have to hit an 18-inch plate on their only shot. To earn points at subsequent ranges shooters had to hit the target on one of their first three shots, but had to hit before moving on.

Each shooter has a spotter. Wind and thermals can have a big influence on a 400-grain bullet from left to right as well as up and down. The spotter is important especially at a range that is equivalent from the middle of Tyler’s Rose Hill Cemetery up Broadway to the middle of the downtown square, about six seconds of air flight for the bullet.

Although she advanced to the final round, Paul was sitting well back in ninth.

“It was a come a from behind win. The leader had me by 20,000 points or something. I was not hopeful. I was thinking if could stay in the top 10 out of 77 (shooters) I would be very happy,” Paul said.

Shooting positions for the final round were determined by a draw. Paul was lucky and drew a late 12th position. That meant the sun would be well up on the target making it easier for Waggoner to spot her shots.

“You have to fire the first shot and dial in from there. You have to stay focused at 2 miles. Stay steady on the gun. Robert was making good wind calls,” Paul said.

At that distance zero is not the objective. Hitting anywhere on a target smaller than the bed of a pickup truck is the goal. The spotter actually cannot see hits. They are looking for signs of misses on the mountainside.

Using shooting parlance, Paul said her first shot at 2 miles was about three-quarters a minute, or about 20 inches, off.

She made the necessary adjustments and scored a hit on her second shot. With excellent downrange conditions she held steady hitting again on the third and fourth shots before missing on her final attempt, giving her the win.

“I didn’t know at first because I was so far behind and the leader had a hit. Robert said I thought you may have won this, but I didn’t know for sure until (shoot organizers) grabbed me,” Paul said.